Who shoots best when the game is on the line? Let’s call it being clutch. I chose to not come up with a new definition of crunch time but to take the commonly used NBA version of it.

I’ve counted all shots being taken by any player in the league with five or less minutes on the clock in the fourth quarter or overtime when the teams were within five points of each other.

Here’s the table of all players who took at least ten of those shots, sorted by their FG% in the given situation: 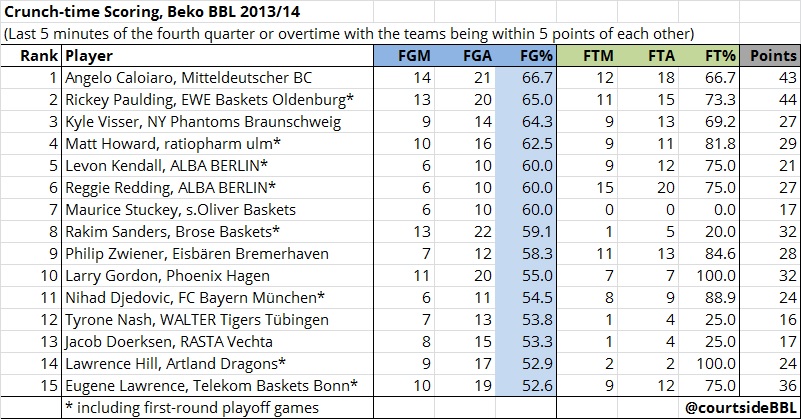 These numbers include the quarter-final games for each playoff team. I was thinking about just going with the Regular Season numbers as every team has an equal number of games played making the numbers easier to compare. But, as I’ve found, crunch-time minutes vary so drastically that it doesn’t really matter whether to take into account four or five more games for this year’s playoff teams. Also, crunch time in the Playoffs is more valuable than crunch time in the Regular Season as the outcome of a playoff game most often is more important than the outcome of any other season game. That’s why those numbers should go in their as well.

And here’s the Top-15 sorted by Total Points scored in crunch time:

Few things I found interesting (in no specific order), all numbers are crunch time only:

1. Bamberg is actually the worst free-throw shooting team in the league (by a lot), making just 63.9 % of their shots. They’ve been bad at the line all year, but that stat still suprises me, especially given that they lead the league in FG% in those situations (44.8 %).

3. EWE Baskets Oldenburg shoot a tremendous 50 % on threes, with Rickey Paulding alone going 7-7 from three this year in crunch time. Both, Oldenburg and Paulding lead the league in 3P%.

6. Angelo Caloiaro leads all players in FG%, shooting 14-21 in crunch time (66.7 %). He shouldered a lot of responsibility this year, and was able to deliver in most of the games. What’s more interesting, though: He shot 10-11 from near the rim (90.9 %), by far the greatest percentage of anyone taking 10+ shots from that distance.

7. As Braunschweig have played a lot of close games, there’s three players in the Top-10 for points scored in crunch time, Isaiah Swann (42), James Florence (40), and Immanuel McElroy (38).

9. Alba’s Jan Jagla has taken three shots in crunch time, all in the playoffs. (He made two of them.)

Who shoots best when the game is on the line? Let’s call it being clutch. I chose to not come up with a new definition of crunch time but to take the...