I uploaded a chart to Twitter this morning. It contained all the 2014-15 season ticket prices for the 18 Beko BBL teams. Some teams offer family packages, all of them seats for handicapped people, some teams have prices for children, others special prices for courtside view, and so on. Since something all teams have in common is a regular price and a reduced price for tickets, it seemed appropriate to me to compare these two and leave all the other parameters out of the equation.

So, what I did is I went to all the different team’s pages and located the minimum and the maximum for tickets within those two categories. (Try to find Ulm’s, not that simple…) Once I had all those prices in an Excel chart, I put them together in a smaller chart, sorted it by alphabetical order of the team name and colored the fields from red (most expensive) to green (cheapest). There’s a function for that in Excel. This is what I came up with and put in my tweet (that went through the roof, compared to pretty much all tweets I ever sent out):

No interpretation in the tweet, just what I labeled the chart with. So far, so good. Now, remember that each team has their own way of special offers, package deals an so on? Well, some teams (Artland and Bamberg) package BBL games and Eurocup Regular Season games. These packages are not optional. Take it, or leave it. Alba for example offers both, a season ticket for all BBL games, a season ticket for all Euroleague games, and a season ticket for both. Bayern gives you the Euroleague RS for free if you buy the extra Euroleague package (thanks to Erik Blosze for clarifying). They also have cheaper tickets for the stands, but those are not on their website, they are held by the fan club. (Thanks to Mattes for making me aware.)

Oldenburg, Frankfurt, Ulm all have seperate deals for Euro competition. Crailsheim offers the choice between a jersey and a hoodie that comes with the season ticket (for free), Göttingen gives you a shirt, Bayern a scarf. There’s all kinds of special offers. I decided to not account for those. Just like I didn’t account for courtside seats and so on.

What I wanted to show is what a fan (I’m a fan) has to pay to buy a season ticket for his favorite club. I do BBL, my Twitter handle is @courtsideBBL, obviously I do care about transnational competition and tweet about it sometimes, just not that often. My focus is and always has been on BBL basketball. So I’m a BBL fan, I want all BBL home games in one package, what do I have to pay? This is what the chart illustrates. If I’m a regular adult (meaning I have no reason to get reduced prices) and want to see all of Bonn’s BBL games, my options for a season ticket range from 190 to 425 Euros. If I’m a student from Hagen and want to see all BBL games, I have to pay between 110 and 150 Euros to get in. That’s how it goes.

Now, as I said, some teams bundle their BBL and Euro competition games. Good for them, their choice, they’ve thought about how to best sell their tickets thoroughly, I’m sure of that. But if I’m a BBL fan, want so see all my team’s 17 BBL home games, and don’t care about Eurocup basketball, their’s no option for me to exclude the EC games from my season ticket. Thus, I have to pay for them and leave the seat open, sell my rights to the season ticket for those games to any other person, give it to a friend, or whatever. Point is: The package, like I said, is not optional. So if I’m a regular paying adult from Quakenbrück, I have to pay between 249.5 and 513.5 Euros. That’s on their website. If I’m a student from Bamberg, want to see all … and so on … I have options ranging from 99 to 280 Euros. It’s on their website.

I hate making mistakes, grammar-wise and mixing up numbers, but it happens. If you find one, please tell me. I did not, however, mix up any of those numbers, at least as far as I’m aware. And I did not interpret any of those numbers. All I did was color them from red to green, depending on how costly they are compared to other team’s season tickets. For a fan that wants to go see all of their team’s 17 BBL home games. I could have, should have clarified this in my chart, and did to some degree with excluding special offers. I could have put in an extra column for how many extra games, jerseys, wins, sell-outs, chants you get for your money. I didn’t. This is what it costs. This is how much you pay for 17 BBL home games if you order a season ticket.

Take it, or leave it.

Update (September 19, 2014, 17:48): Thanks to S. I stand somewhat corrected. Trier’s season ticket prices were for the 2003/2004 season. Double-checked every other number, couldn’t find any other mistakes. Here’s the updated chart: 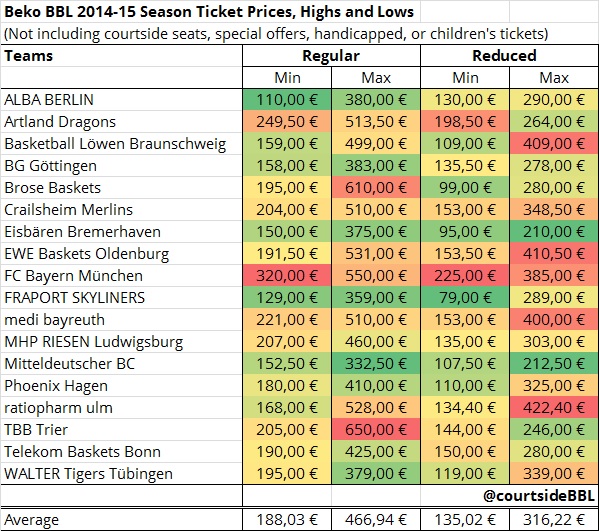 Update (September 19, 2014, 20:22): Birte Meyenberg made me aware that buying single tickets for every Artland Dragons BBL home game would be cheaper than buying their BBL-Eurocup season ticket package. I haven’t checked, but she would know.

I uploaded a chart to Twitter this morning. It contained all the 2014-15 season ticket prices for the 18 Beko BBL teams. Some teams offer family packages, all of them...